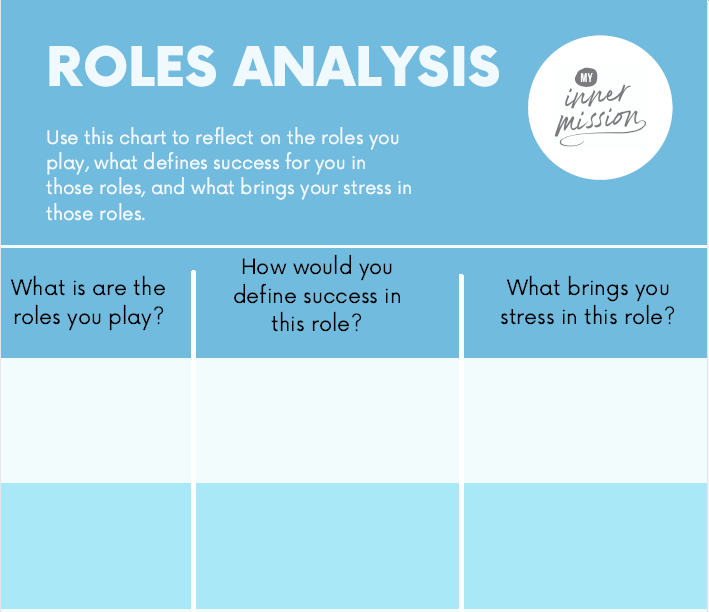 Reconsidering the Roles We Play

When I was going through My Innermission and experienced professional change—at one point I thought, “All I’m doing to switching jobs, no big deal.” But what I didn’t realize is there was a ton of value I had associated with my job, the role I played in an organization, and how that translated to other roles in my life like the role of mom, wife, and as an individual.

For example, I felt success because others needed me and saw me as a resource. What brought me stress, though, was when I didn’t feel like my support was being leveraged enough and that people were feeling frustrated because they couldn’t get enough support from me. By doing this analysis, it helped me understand that the stories I was telling myself were that my work has to matter to others in order to be important and that I have to be able to meet everyone’s needs. Those two messages were partially responsible for my sense of burnout. After realizing that, I reframed what I really wanted out of my future professional role: Instead of feeling like my work had to matter to others, my reframe was that I had to feel like my work had impact in the world (not relying on how others saw it). I also reframed the notion that I had to meet everyone’s needs to say that I wanted my support to be accessible and strategic, so I could support more people sustainably.

What emerged after noticing who I was and how I felt when I wasn’t in my role as mom, wife, daughter, professional, etc. was that I felt success when I nourished my body, when I engaged my body in movement, when I took time to be creative, and when I could explore new ideas that weren’t tied to any of my other roles, but were just things that I wanted to learn about. Conversely, when I had to ask the question when do I feel stress in my role as an individual—that was actually an easier response—it was just when I wasn’t taking enough time for myself.

Asking ourselves about our preconceived notions about how we would define success in the roles we play can help us all name the stories that we are telling ourselves and the “shoulds” that we give ourselves, that may actually be causing stress. Once we understand the measures of success in our roles that feel authentic, sustainable, and in line with our true selves, we can begin to think about how our actions line up to those measures of success.

Again, from my example, when I unpacked what made me feel success as a mom, I named that one of the ways I measure success is how independent my kids can be and how ready they are to take responsibility for themselves and their lives. When I had clarity around that, I looked at something that caused me stress—hustling to make their lunches in the morning before school. I realized that if I really wanted to live into being what I felt like was the mom I wanted to be, having the kids make their own lunches would reduce my stress and would support them in becoming more independent. It was a small thing, but made a big difference once we started it.  It made me feel like my daily actions had greater intention and alignment with who I wanted to be.

If you want to do your own roles audit, I've created a pdf here that you can use to reflect on your own roles, definitions of success, and stresses. Be honest. Take time to get curious. Look for the connections between the roles you play and how you meet your expectations of success.

Keep in touch and receive updates!
Thank you! Your submission has been received!
Oops! Something went wrong while submitting the form.